After many visits to deer parks this year, I have so much reference I want to use for stag paintings.  For anyone who doesn’t know, a hart is a male red deer and that is why I have themed this whole series on Harts.  ‘Heart to Hart’, ‘Be Still my Hart’, ‘The Hart of Winter’ and this one will be called ‘Brave Hart’.  Him and ‘The Hart of Winter’ have a bit of history so I thought it was fitting to do a painting in a similar setting.
Unfortunately this Autumn The Hart of Winter stag was overthrown in his rule of the harem (the herd of female deer) in Gosford forest park.  I arrived a couple of days too late to see him after being there in March but there had been violence in the rut and he was dead.  This is the brutal reality of life as a wild animal but I still felt sad he was gone.  It made me realise my painting of him looking over his shoulder, which I’d brought to the park to work on this time, was very poignant.
So this painting is of the new King of the park, making an arrival.  I thought it was pretty brave of him to make a challenge.  Maybe there will be peace in the park now until next year… 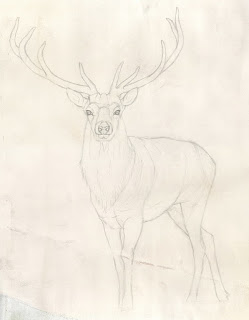 My outline done on cartridge paper.  I’ve just
used a mechanical pencil which I like to sketch
really lightly with getting gradually heavier as I
commit to lines.  This paper gets covered in
black pastel rubbed in on the back and then
transferred onto the velour by taping over
the velour and drawing over my lines.  The
most simple way of getting a drawing onto velour! 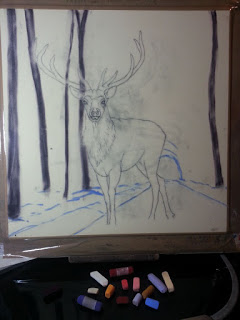 My line drawing transferred and tweaked a little
more.  Now I’m just planning the background by
adding some wavy trees and a vanishing point
just off to the right of him. 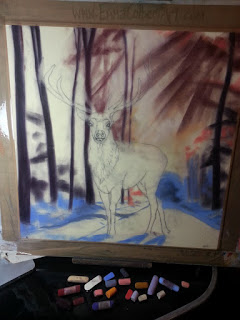 Starting to block in some other shapes.
The whole background is going to be very
blurry and I’d like to keep it as loose as possible
so that all the focus is on the stag. 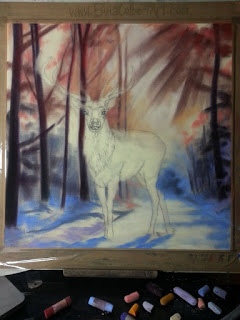 You will see from these few shots how I
gradually add more blocks of colour blending
it well into the paper all the time.  I go quite dark
to begin with as the lighter tones will blend nicely
on top letting some of this shine through. 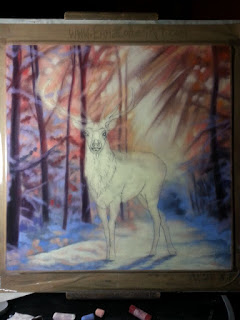 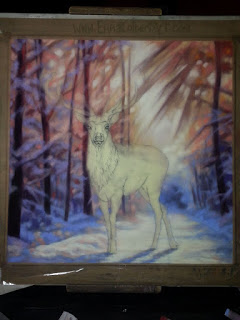 I still have some work to do on the foreground
area when I get down there.  I know I haven’t
thought about his shadow properly and I need
to portray how his weight is balanced properly.
That back leg is lifted slightly and the others need
to feel more sunken in the snow. 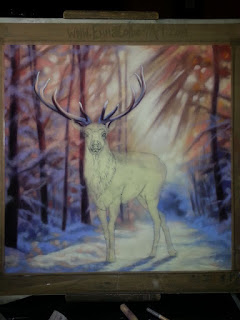 Using almost all Unison pastels in this and
the very brightest of lilac purples, cool blues,
coral oranges and vivid red.  The grey27 which is
a very yellowy Unison white is the lightest tone.
I’ve also used one of Terry Ludwig’s dark range.
It’s in the lovely rich warm dark areas 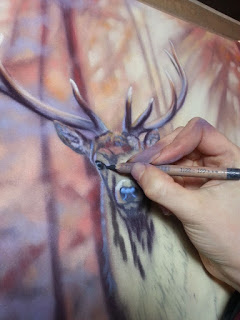 The only place I’ve used any pastel pencil is
around the very small eyes.  I sharpen them pretty
fine with a scalpel for stuff like this. 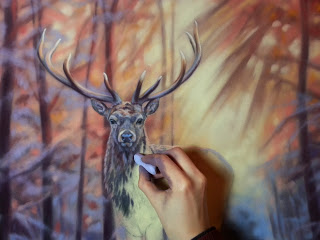 I love when there is someone looking back finally! 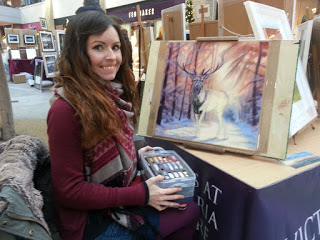 Working at my stall at Victoria Square last Sunday.
It was pretty chilly but lots of people about to see some
progress on him. 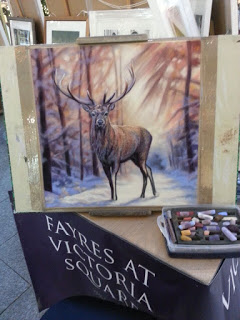 By the end of the day I had got a couple of layers
done over his body.  I dot on fine layers of colour so
that the colours all sit beside eachother so I have a
few layers left to do yet on his body as well as his legs. 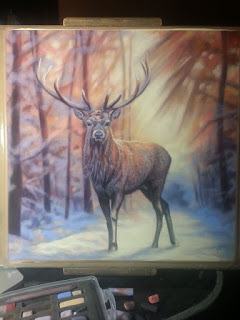 Another half day sitting and I’m getting on
now just adding the small marks down his legs.

Hope you have enjoyed his progress.  I’m looking forward to getting him into his big frame!