I met Pat and photographed him for his portrait at his home.  He had the most gorgeous view from his window which created an unusual diagnol line behind him so we decided to have this as the backdrop.  I hope he likes what I’ve done, I’ve now painted him and his partner so it’s nice to think that both their portraits might hang out near eachother 🙂

Hope you enjoy the progress… 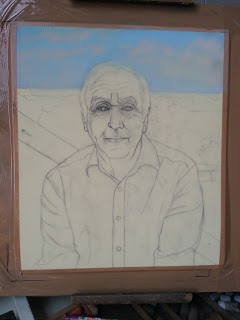 The first stage of my portrait and I’ve transferred my outline
onto the yellow velour.  I like the yellow for portraits as it’s not
too dark and adds some warmth too. 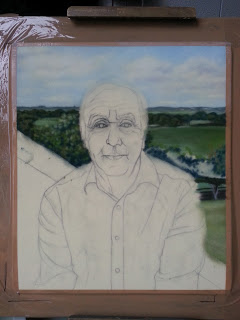 That lovely view out the window is the first
thing I’m working on.  I’m not adding much detail
to it or it’ll be distracting from Pat.  I hope to just
hint at the distance and the less detail you put in
the far away areas the more realistic the overall effect. 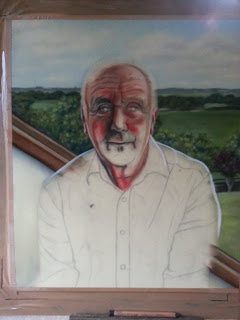 The first scary layers of the skin tones.
I block in small areas trying to get a feel for
how dark the contrast needs to be and also some
of the reds and greens I can see in the skin.  If I’m
using a lot of red in skintones I will counter that
with green in the shadow areas. 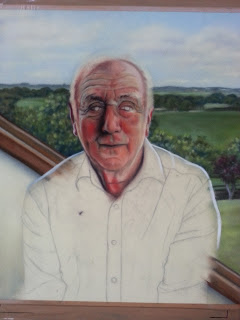 Starting to bring in some of the lighter tones
and still very much working the dark areas.
I try to avoid adding too much light too soon
as you need the darks down first. 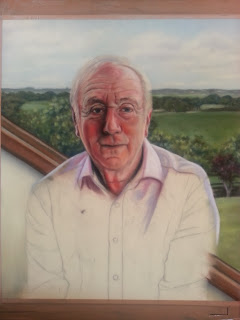 Worked up as far as the midtones and starting
to pick out a few highlights now.  I’ve also added
in some of his shirt which I find is always helpful. 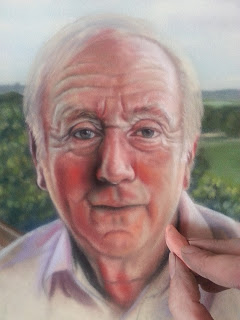 I’ve spent a long time on his eyes and hoping
I’ve got his expression just right.  He has a sort of
amused but friendly expression so I hope that has come
across.  I think we might have been talking about
something funny or perhaps he was just amused at
being photographed.  I always hope I catch a person
in a moment that they look just like themselves,
not uncomfortable in a situation that can feel a bit
un-nerving.  I know I don’t like posing for a photograph
so I hope to put sitters at ease! 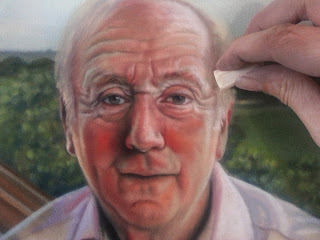 Coming along well now, I think it really looks like
him at last! 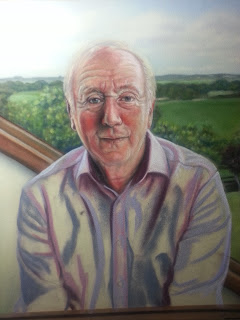 Starting work on that pink (purple, yellow, blue
pink) shirt!  There were so many colours I could see in these
folds it really gave me quite a nightmare!  It will also
be an important part of the overall effect as it will
really show where the main light is coming from. 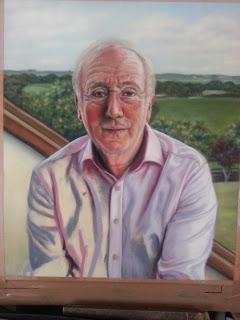 Almost there, think I’ve got the palette for
the shirt now…just the other half to do! 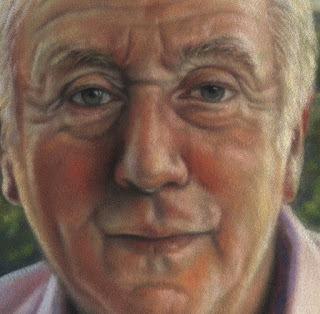 Here is a close up of his finished scanned image.  I’m really happy I’ve got a good likeness, he has been such an interesting character to work on.
Be sure to check out my Facebook page and leave me a ‘like’ there at Emma Colbert Art
Thanks for visiting!