I was asked to paint Rossi as a special surprise present.  I went to photograph him at his home and he was such a pro at posing and a very lovely wee character too!  The family picked a pose and later decided to have him painted amongst sand dunes to represent their local beach where he loves to spend time.  I took some shots of dunes where I might place him and combined a few images to produce this.
Hope you enjoy his progress… 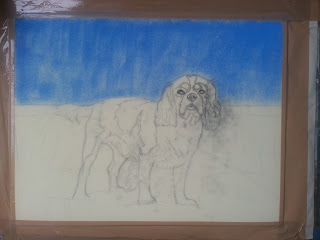 The line sketch on my paper and I’ve started to
block in the sky area.  I’m cutting the horizon at
roughly the golden ratio 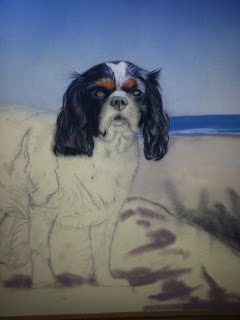 I could go on and work more of the background at this stage
but I want to get on and get the most detailed part of the piece
worked on, Rossi’s face. 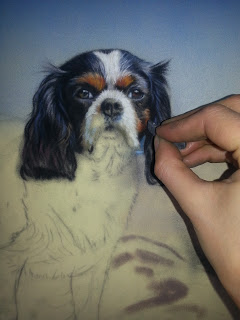 Constantly going back and making the darkest
areas darker and the lightest highlights brighter.
King Charles Spaniels also tend to have unusual eyes.
I love how they often have space beside the iris
on both inside corners.  But tricky to get them
not to look odd in the painting!  I’ve adjusted those light
blue triangular slithers several times! 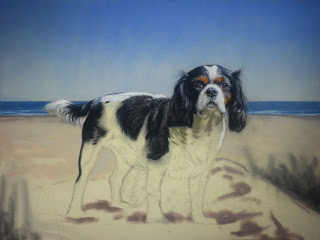 Working in the darks on the rest of his body and getting
that top line of his body completed.  I’ve used a lot of the
blue in the sky for the highlights in his dark areas.
The white parts of his coat in sunlight were done using Unison Grey27
which is lovely yellowy white, and then pure white (Grey 28)
over that in places where the light is really bouncing off his
white bits.  If you overdo the white, he will look flat.  Trying
to hang onto the brightest highlights for the places that
really need it. 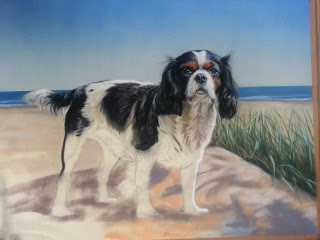 Starting to work some of the foreground dunes in now.
I want those parts behind his legs done before I add his
feathery edges in.  Also working some of the tones down
his front.  At this stage I’m trying to choose some colours
for the base and mark in the direction of all those swirls of
hair.  The under colours are important as they will shine through
the top layers.  In the reference photo he is very green on his
front because of the reflected grass so I will have to counter that
with the colours he would reflect on the sand instead. 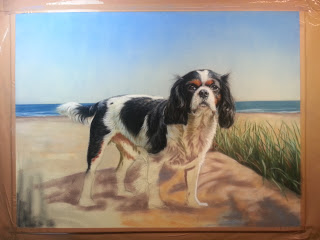 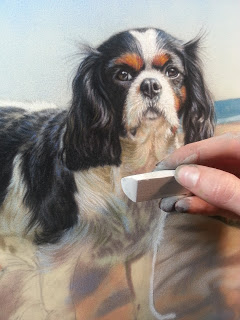 Using a large stick of BE1 which I love as
a warm light tone for shadowy areas.  Even with
the larger Unison sticks you can see how they can
have good sharp edges appear.  I often use this stick
on it’s end and it’s side for light films of colour over
a sky or something, and this leaves a great set of edges
for fine hairs.  Because the light is hitting him from
slightly behind on the right, there are some areas
where I’ll use the white to highlight how the light
shines through and catches some places on his front. 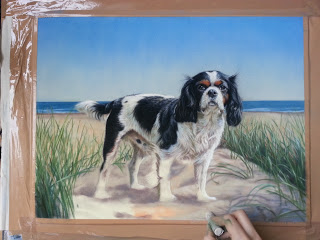 I’ve layered some warm orangey tones down
on the sand area.  That BE1 I used as a highlight on
his front is used in the sand highlights too.  I’m also
using some of the sky blues in the shadows on the sand
for a nice balance to the orange. 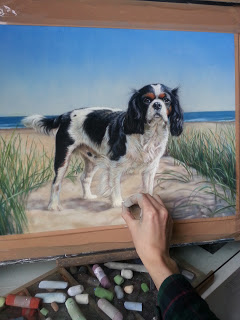 Trying to make his paws look balanced on the
sand.  I photographed some dunes with his
reference photos in hand and tried to choose an area
I could really see him standing in.  The little rises
in the sand around his feet hopefully make it look
like he was there.  I also looked at my
dog on the beach and how a small dog’s feet look
in the dunes, whether they sink or spread out.
Hopefully I’ve made it look natural. 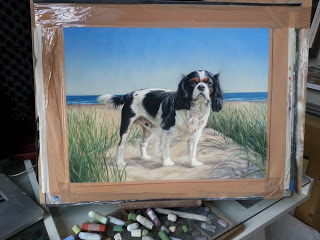 Thanks for visiting my blog!  Please call back soon for more work in progress and follow my work on Facebook at Emma Colbert Art